skip to main | skip to sidebar

The Royally Delicious Cuisine Co. at the Buffalo Spree Best of Buffalo 2009 party. Below are some of the tweets our guests sent:

The herring was "magnifique!"

Better than you can imagine.

Wonderfully light. I have never experienced anything like it.

The only tastes I didn't feel guilty about later.

The most delicious cuisine. All the fragrances are fit for a king. The vittles are princely. - Lou Milazzo

I swear I have never tasted anything like it. - Lord Turmoric

I don't like the smoky flavor of the salmon but the drink was a nectar.

Better to be a town twit than a town twat.

Finally the royalty has arrived.

The fluffiest, most delectable cuisine ever imagined.
Posted by John Carocci at 10:36 PM 82 comments:

Here, at long last, is a taste of our performance in and around the crowd at Shea's last summer as part of Buffalo Spree's 2008 Best Of WNY party. (Sidenote: Guess which self-acclaimed improvisational satirical collective nabbed an award that night as Best Experimental Act?)

Sad you missed us? Weep not, for we've been invited back THIS year:

Tickets are $30 in advance and $40 on the day of the party--and either way it's a bargain, given the amount of food you'll get to try, the wine you'll taste, the goodies you'll take home, and the friends you'll run into, to say nothing of a once-in-a-lifetime Dream Cab show. All the proceeds benefit Camp Good Days & Special Times. 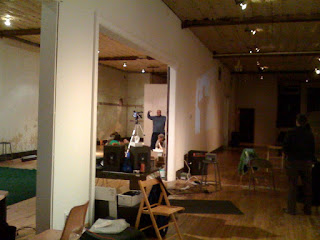 OK, OK, so we're still not the most diligent of self-promoters, but we've been steadily Dream Cab-bing away all along. At the moment we are working on WoyUbu, an epic collaboration with the Intermedia Performance Studio at UB and a veritable army of robots and the humans who make them run. It's so epic, in fact, that some of us have been working on this thing for over two years now--but next month, every Friday and Saturday from March 13 to 28 at 1716 Main in Buffalo, you'll finally be able to see the end result.

In the meantime, you can watch the production come together through this behind-the-scenes blog, with entries by the director, performers, tech masterminds, and other parties. (That's right--shocking as it may sound, we are working with an outside director, learning lines, rehearsing for more than a week ... It's a whole new world for the Real Dream!)
Posted by Ron E. at 9:37 AM 5 comments:

Posted by John Carocci at 8:44 PM No comments:

You're probably wondering what the Real Dream Cabaret has been up to lately because "keeping our website and blog up to date" is clearly not part of the answer. Though not technically a RDC project, several cabbers (Jack Papier, Ronawanda, The Why Not Guy, Elizabeth and Eamonn) portrayed pretty much an entire town in Brian and Holly's epic cinematic retelling of the Scarlet Letter, starring our own Claire as Hester Prynn. The film premiered to a packed house at Hallwalls in February and got raving reviews. Squeaky Wheel's Peep Show brought out our romantic side as we gave Speed Dating another shot. Ronawanda, Elizabeth, Doug and The Why Not Guy were looking for love but alas, it wasn't meant to be. March was easier. So easy, in fact, that we presented the Easy Show for one night only at Rust Belt Books. The evening featured not one but two splashy musical numbers, topical Spitzer/Hooker jokes and Anna Chiaretta. All three seemed popular. We also learned just how prolific Holly is (answer: very). In preparation for the perpetually upcoming Outlaw Show we're enjoying the ongoing Real Dream Cabaret Book/Movie Club. So far we've watched Steal This Movie, Bonnie and Clyde, Paper Moon, Dogville and Breathless. INSIDE AND OUT:
INFECTED DISTRICTS AND MEMORY LANES

A Multi Media Extravaganza
Featuring Film, Performance and Music by


Carpetbagger film artist Mark Street and Buffalo cognoscenti THE REAL DREAM CABARET and members of the OPEN MUSIC ENSEMBLE join forces to meditate on climate change, that elusive inside/outside chasm, and how this city can be read differently depending on your vantage point. This rollicking, untamed evening of live performance, film and music will include interviews conducted on city streets about global warming, madcap anachronistic vignettes, hand painted 16mm film footage, archival images of the ‘77 blizzard, sublime and winsome footage of the Ohio St. bridge and a short movie of a former resident rediscovering a love of bowling first discovered on the Polish East Side in the late 1960’s.


featuring a different house band and guests artists each weekend:


(Note: weekly lineup is subject to change;
this post will be updated as needed.)